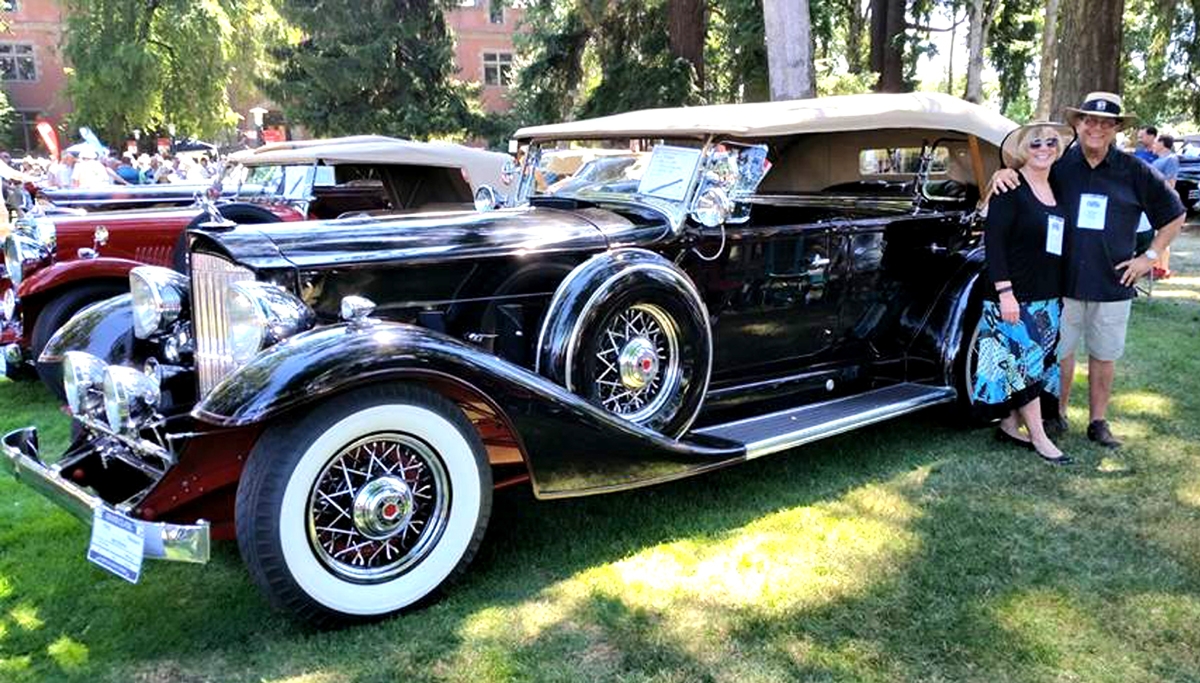 "Blackie" Me, Doc Hemp and my Becky Girl now in our 53rd year of marriage :-)

Our very original 1933 Packard Super 8 Dual Cowl Sport Phaeton 21,800 Original Miles and Never Off the Frame (99 Points), Previous Owners David Kane and Ron Doss (Need I say More?) "Blackie" even has the original functional manifold heater still in place! Very Rare and the only we know of.

This Photo was taken at the Recent 2015 Pacific Grove Concours Where Blackie was Awarded the Statesman Jerry Hanauska Memorial Award, and Also 2nd Place in the C5 Classic Open Cars 1933 - 1939. Sponsored by: Barrett-Jackson. 1st Place in our C5 Class went to Larry Nannini, Colma, California with his 1934 Packard 1104 Super 8 and also a VERY RARE Dual Cowl Sport Phaeton like Blackie, which also won the "Best of Show" with a perfect 100 points, fresh off a total ground up restoration. 3rd place went to Bob Newlands and Jan Taylor with their 1935 Packard 1204 Convertible Coupe. An email posted at the bottom of this page.
The Forest Grove Concours Also Hosted the Oregon CCCA National Grand Classic at the same Event. 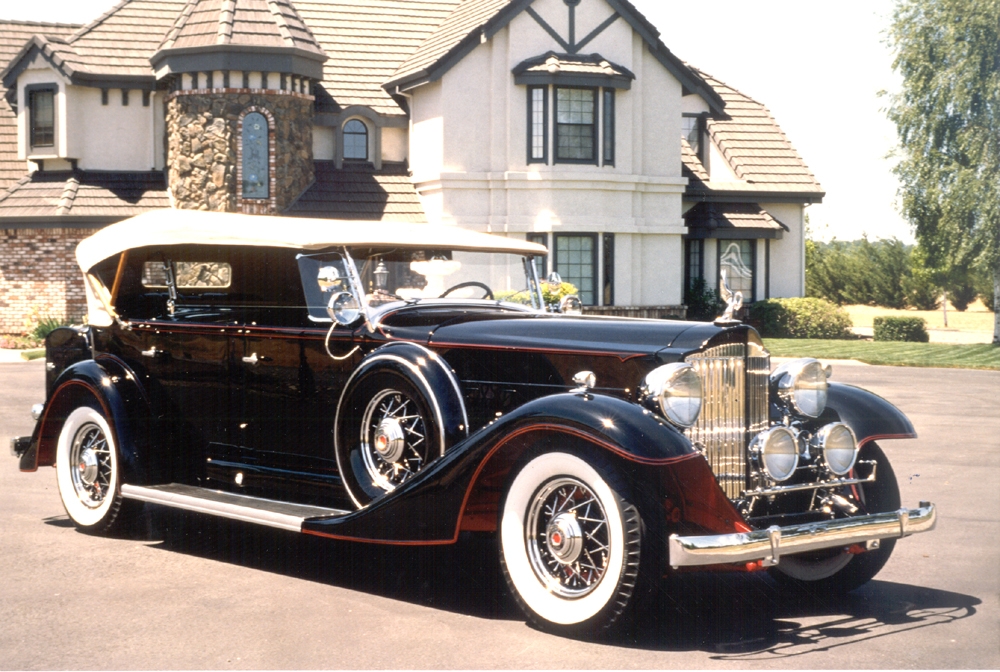 This wonderful photo of "Blackie" above was taken by Bud Juneau for a magazine cover.

Pebble Beach Concours Co-Chairman, Jules Huemann & one of our favorite (Packard nut) actors, Edward Herrmann fighting for a picture with ole Doc Hemp & Blackie - hee-hee .... Edward has a beautifully restored 1936 Packard ... He also rode in the rumble seat of a 1934 Dietrich 12 Convertible Roadster in front of us on the 50 mile tour.

The Packard Gal shown with "Blackies" 100 Point Trunk
As judged at Pebble Beach Concours with its original
Travel suit cases one would remove to take into the hotel, etc.

Some history of this car from new

This is one of the world's very rare and most original cars, with a rich history since new and as far as anyone can tell only about 21,000 miles and never off the frame, always maintained in excellent condition by each owner since new and restored as needed by most. Some restoration was done by Stone Barn, etc. and most recently we have brought Blackie back to 100pts in 2000 & 2002 at the last two concours. .... Note .... 1/2010 ... "Blackie" is still perfect and running great! We drive him only enough to keep him in shape.
There is still some of the original carpet in good shape around and below the front seats and most of the original leather

"Blackie" has won 1st in class at Meadow Brook when David Kane was the owner, and when Ron Doss owned and named "Blackie" .. 1st at the Classic Car Club of America's National Grand Classic with 99.5 pts, Senior Badge # 2111. It was also 1st in class, received the Artisans Award & Peoples Choice at the Port Gardner Concours, as it did People's Choice at Fresno when we first bought "Blackie"
It was since then also one of the 7 Classic Era Packards invited to Pebble Beach in 1999 to represent Packard's 100th birthday where it had only a very incidental markdown in the engine compartment (because of the 50 mile tour we went on before the show in the rain) but still scored almost a perfect 100 points.

Blackie is featured on the Show Case (Robb Report's) Magazine cover Aug 2000 for Pebble Beach's 50th Anniversary Edition filled inside with photos and information from the past 50 years at the P.B. concours which was presented to everyone coming in the gate for Pebble Beaches 50th Anniversary that year. Becky & I are very honored that Blackie was chosen for the cover out of all the cars presented at Pebble Beach over those 50 years. (8/2/15 ..I will scan the inside and post some of it shortly) "Blackies" photo on the cover by Jerry Wyszatycki)
Blackie was also featured in Hemmings Special Interest Autos, (Great Photo) ... article by Chico's world-renowned Automobile journalist Arch Brown with photos by equally famous Bud Juneau. Lots of production costs, weight, horse power, and all the proper production #'s.
And most recently, on September 17th 2000 at the Chico Concours, Blackie won First in class with a perfect 100 point score, Peoples Choice Award, and tied for Best of Show with a rare Ferrari, which was the only other with a perfect 100 score out of about 200 cars. Since it is their policy not to give multiple major awards, and with my blessing, it was given to the very deserving Ferrari.

"Blackie's" History - updated 7/25/15 with even more documentation I found from Ron Doss on 1/26/2011. Ron states that the roster keepers knew of this car back to 1964 when they started keeping records

The first family to own this 1933 Dual Cowl Phaeton enjoyed it for 35 years. The car was passed on from the original Damon family to his grandson Sherman Damon. Mr. Damon took the car from Brookline, Massachusetts to his summer home in Vermont. A dealer (Tom Mix?) learned of the car in the 1960's and persuaded Mr. Damon to sell the car and resold it to Mr. Frank Mueller. Mr. Mueller kept the car in his Packard collection until Oct 14, 1992 at which time he sold it to Robert Bolt who then sold this car to a (John Wheatley? of Webster Classic Auctions) on May 6, 1994 who then sold to David Kane (CCCA National Director) 4 months later on 9/21/94.

David had some work done by Stone Barn Restorations. The car then went on to win Meadowbrook in 1995 or 96.

Becky & I are now doing our part. It still has the original brake shoes, manifold factory heater and fan & a lot of the original leather upholstery, some of the original carpet, chrome on the trunk rack, spring covers, spring shackles & still Nitro-Cellulous paint - painted as necessary, by David Kane, Ron Doss, etc.

Packard started the Super Eight Dual Cowl Sport Phaeton series with body serial #11 (661-11) Our Serial # 661-13 would have been the third dual cowl sport phaeton built and was supposedly used at the world's fair and in Packard's show circuit for 1933 at New York and Chicago. Don Williams (Black Hawk) now owns the 6th one built (Serial #661-16) and Glenn Mounger now owns the 8th one built (Serial # 661-18). These are the only three known left in existence. As per auto historian Arch Brown there were no 1933 dual cowl sport phaeton twelves built by packard and only one Dietrich 33 12 built that was also owned by David Kane who also owned Blacike and showed at Pebble Beach Concours right next to Blackie in 1999 Packard's 100th birthday year.


This would indicate it was produced probably during the first 15 days of production, which started on January 5th of 1933 & ran through August of 1933. Only 788 total 10th Series cars were built and only 55 total of these were custom ordered Packards including Dietrich's too as per auto historian Arch Brown. I have included this info on his article about our car.
Of these there were probably only 3 to eight 1933-1004 Dual Cowl Sport Phaetons built. Dietrich designed, but Packard Custom built. As Pebble Beach designated "Blackie" at the 1999 P.B. Concours and Packard's 100th Birthday party there. Three of these still exist. Ours was delivered with the factory red undercarriage. "Blackie" was referenced years ago during the other restorations, etc. as it is one of the most original and perfect Packards there is. This body style is among the most desirable in the world. As mentioned, Don Williams Black Hawk car (previously owned by Ed & Pam Rittenhouse from Washington State - Pam picked out the mauve color, which looks very good by the way) is one of the other two and is thought to be the 6th one built. It can currently be seen at the Blackhawk Museum in Danville, CA. And the the other is in Washington state and is owned by Glenn Mounger. It is also Black with a factory red chassis and is thought to be the 8th one built.

1933 was the first year of the "Super Eight" designation. The Dual Cowl Sport Phaeton Super 8 was also Packard's largest car with a 142" wheel base. Packard also chose this Super 8 Chasis to put their 12 cylinder engines in too. Thirteen body styles were offered in the tenth series.

"Blackie" even has his original manifold heater system with fan still 100% intact .. I have disconnected the fan due to cases of carbon monoxide poisoning from these early systems ... BUT .. It and the very rare lighted switch are still in tact and has power to it .. I will show it one of these days with some of the other factory original items such as carpet, leather upholstery spring covers, cigaret lighter, etc.

The original factory manifold heaters were removed by dealer recalls due to carbon monoxide poisoning, and there are almost none around anymore.