This site is part of & made possible by the B.A.D. CHARIOTS - (Harleys, Racing, Trains, Planes & Automobiles) and Doc Hemp's DENTAL SITE Homepages! So, Please visit Dave & Becky's other 200 urls there too! After visiting this great page of course! Also visit our world class hi-tech Music Room! 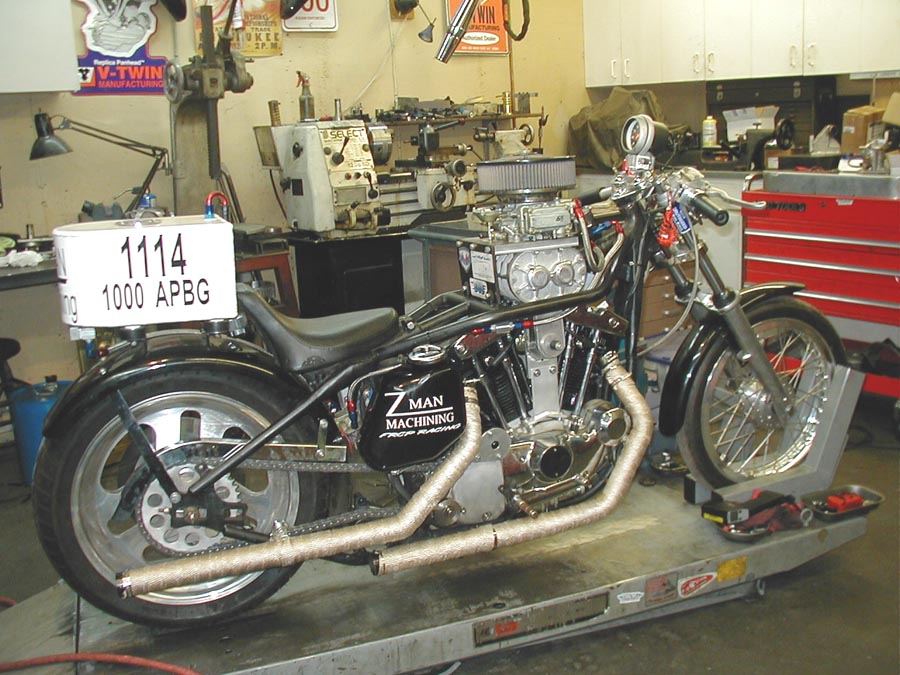 Willie John got to the track a day early and set up our pits early Saturday, resulting in an excellent location close to the starting line. We went through scrutinizing Saturday afternoon, and passed with flying colors.

The track is in good condition, and is about nine and a half miles long.

Today we will rejet, and try to set a new record.

Monday; hurry up and wait. We waited all day to get to make a pass. We got to the starting line at about 4:30, and were told we had time to do a record attempt. We made our pass; the track was getting a little rough, and a top speed of 128.049. I went to Impound to get ready for my backup pass, and they were closed. The track workers are all volunteers and the correct information does not always get where it needs to be, we will try again tomorrow.

Tuesday; more of the same but a better place in line, organization is improving. We spent the day getting to meet some very interesting people, and doing lots of interviews. We got to the starting line at about 2:00. We were third in line to run when a thunder storm started throwing down lighting bolts right near mile 0. Time to get the hell out of here!

We went to the pits and took down the tents and waited for the storm ton pass, The event was closed until tomorrow, when we will be third in line.

At least we were in good company, many top racers failed to break records.

The Awards Banquet was fun! The final award was presented by Santa Claus and the Buell Brothers racing team. It is the Enthusiast of the Year awarded “ to the enthusiast & crew that best embodies the Bonneville spirit.” When he said the award goes to F.R.C.P. Racing, I was blown away! I guess we’re doing something right! He next told us how much money was raised for the Save The Salt organization, and I thought it wasn’t high enough, so I donated the $1000.00 he had just given us.

We are now trying to come up with our own award to present to someone next year.


The 1953 Bonnieville Studebaker - World record holder at 219.585 = Fastest mile with the air conditioning on! Driven by Jack Chisenhall, President of Vintage Air, the sponsor of this car.

4/12/98 - Here is some email just received today - if you have info you can contact this nice gentleman.

Hi Folks,
Really great page. Found the music as I was looking for more info on Ted and the Chicken Hawk. Was impressed with the quality and selections (age here is the "past 50" group, way past.) Was pleasantly surprised to find that Studebaker as I was surfing. Brought back many good memorys. (I raced a '53 commander coupe) Do you have any more info on Ted? If memory serves, he was a teacher in Frankton Indiana in the '60's. Wondered what he is doing and where he's located now. Saw the date on the picture is '96 is that correct? Anyway keep up the good work and all the info you have would be appreciated.
If you accept Comp-Dent I have these two teeth---------- Tom Stephany Martinsville, In. n9imv@onet.net

Thank you very much for the information and update on Ted Harbit and the Chicken Hawk. I was amazed that he is still active in the drag racing sport. Some additional information for your archive; I had the pleasure of meeting Ted and his wife Mary Ann at the swap meet in Southbend In. this past weekend (May 2-3). What fine folks they are. We talked about the "good old days" and such, pretty much like all old folks do. The problem is he isn't following the rules. He is getting faster as he gets older. That ain't fair. The sun of a gun went 10.65 last month with a Stude engine bored .60 over. Can you imagine the reaction time that takes? At the present time he is unhappy with the car because of a fire that occured at the last meet. An engine backfire caused a fuel fire under the vehicle. I did obtain a magazine with a brief auto-biography of his life up to Jan.'95. Most interesting man. Thanks again for renewing my Studebaker street rod interest. Don't know if I will do anything with it or not. Very interesting piece about the fellow in New Zealand and the similarities of your hobbies. The world really is a very small place. You must find out if he has an interest in midi music. That would really be scary if he did. I shall stop boring you with stuff you probably know about anyway.
See ya doc,
Tom

p.s. that stude had a few teeny tiny rather insignificant go fast parts. it has twin turbo chargers that help it along plus a secret or two. ted will admit to 550hp but some other folks say it is closer to 700. ain't to bad for a retired school teacher and basketball coach.