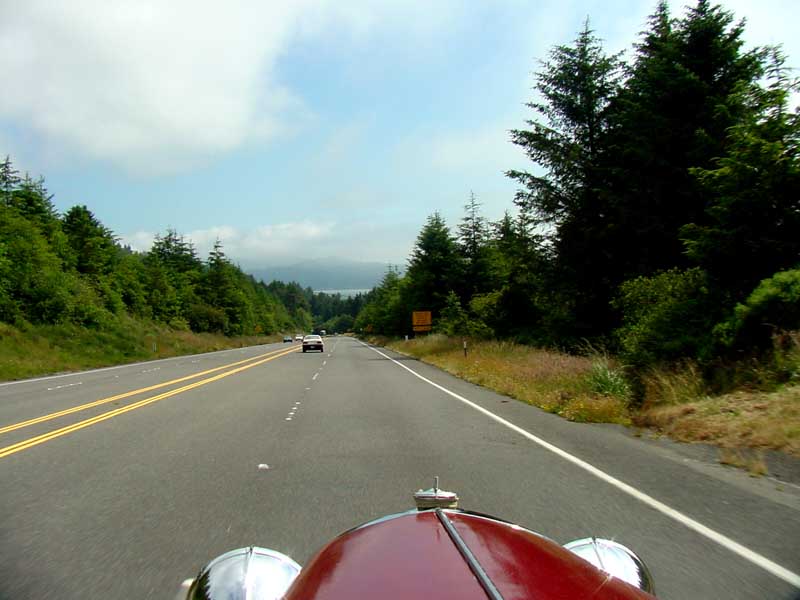 The road between Gold Beach and Brookings OR 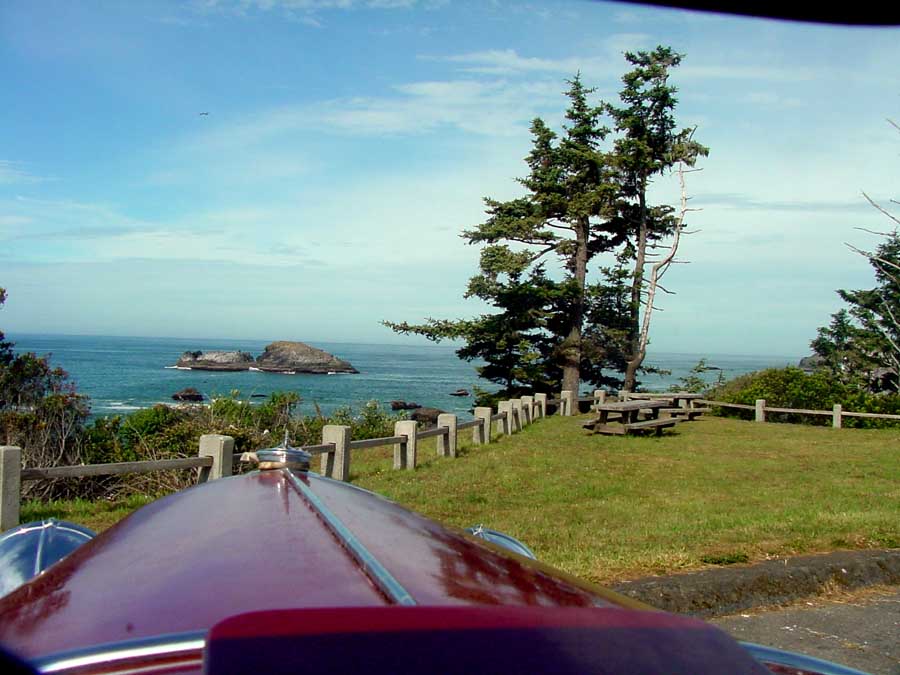 Our favorite photo in Crescent City - Pebble Beach Drive
Please remember (You Must!) click on the highlighted text
in all our journal pages to see our photos

We are going to start the rest of this photo page out with pics we took in the Jot's parking lot Wednesday morning as we were all in the process of packing up and leaving for points South to Eureka.

It was a little foggy South of Gold Beach Wednesday morning after we left ... Dandy ran fantastic till we hit Crescent City, that was still before we figured out the electric fuel pump problem. Still made it okay, but ran rough. We made a short stop in Brookings OR. to gas up and to visit another of our friends from years ago, Buddy Giddings.

Becky and I met in Crescent City ... The Northern most city on the coast in CA . I was 17 and Becky was 16 .... She taught me to drive and I taught her to (park) .... Watch the submarine races or whatever (grin) ... And, since our 39th Wedding Anniversary was during this tour, we took a photo of us and the car in front of both of the houses we each used to live in. Becky had also just recently found out that one of her teen age friends was still living in Crescent City so she gathered up some old photos to surprise her with. We knew she worked in the Post Office there. We finally found her out on her route and they had a great time reminiscing and making everyone's mail a little late (grin).

We then took the Pebble Beach Drive route the rest of the tour took. This is one of the most scenic stretches of ocean along the coast. Because we were pretty late we lucked out with the sun peeking through.

Also, we are really glad the electric fuel pump was acting up because as we stopped for me to try and figure out what was wrong, an old timer, a Ralph Pitman, stopped and said he was just coming out of the Parts store and was sure that was a Studebaker he saw go by. He owned a 1926 Big Six and it turns out he knew Becky's dad and brother very well from the when her dad owned a lumber mill there. He went home and got me a 1931 car book with all the specifications of all the US cars for that year and brought it up, as a gift to us, to The Trees of Mystery which was our tours next stop. I gave him a ride in the Studebaker which he really enjoyed. We got into the Trees of Mystery late and to lunch late at the Forest Cafe because of our stops. But we still made that fantastic buffet! The food on the entire tour was just great!! We then Walked the Trees of Mystery trail and took the new gondola ride they just put in last year. You have a 360 degree view from the top where you can see to the ocean. They have high powered binoculars to check out the wild life, etc.

We then headed on down the hwy on our way to Eureka CA. We stopped at Trinidad CA for gas where Bill & Dee Kuettel were having trouble with his new trunion gears heating up in his Hispano Suiza. We stayed with them till everything cooled off and we re-greased them with a thinner grease that went in a lot better. We followed them into Eureka ... We thought Bill would take it easy .. but here we were running down the freeway at 67.5 mph as per his rpm's I figured out later. He just put a new overdrive system in the car and it really goes!
After unloading and parking at the Old Eureka Inn most of us ran on down to the Carter House to have our cars photographed there. The Carter House is the most photographed house in the world (or so Mr. Carter always says - grin). Later we all got together for our tour's traditional evening cocktail party each night before dinner.

Early the next morning we all headed south out of Eureka taking the loop through one of our favorite towns, Ferndale where there is the most amazing classic era merchantile, where Crook & Co. found some original packaged 6v bulbs and tire repair kits, etc. Out of Ferndale there is a nice back road through the countryside that loops back into Scotia & Reo Dell just above the Ave of The Giants. ... Becky rode with Sandra Kasky in the Cord. What a wonderful wonderful day .... After a great drive.... We had the best catered lunch of the trip at Williams Grove still in the heart of the Redwoods.

Our friend Harvey Harper finally got back to me while we were having lunch and said he would have Floyd keep his showroom of 47 cars and restoration shop open till our group got back into town ... And he also invited all the group we could get ahold of to come by and see his collection ... especially since he was only 5 blocks from our hotel. I called Al and he got the word out to as many as possible. There was a miscommunication as someone else was supposed to have called Harvey the day before but it all worked out. Floyd tightened up my fan belt for me in their shop.
After we finished I placed a fake coffee spill (we bought in Ferndale) on Harvey's favorite Packard, right up on the hood, with a note under it (Thank You for inviting the CCCA into your wonderful collection) Grin.

For the Cocktail hour and dinner we all went to the Public Marina, dock side, in the new community building just South of Old Town on the warf.

Here are a few Hood Ornaments I managed to photograph along the way. Send me more to add here if you have them. 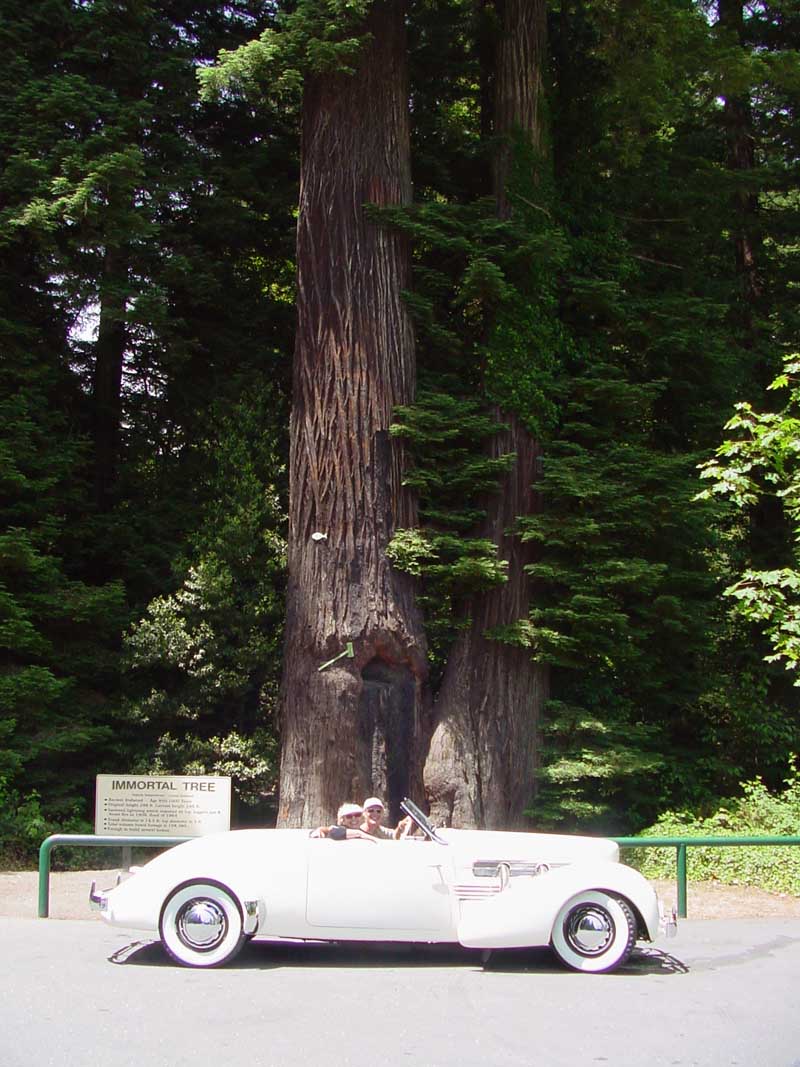 Becky Hemp and Sandra Kasky in this great 1937 Cord 812 S/C Cabriolet!
Click on the highlighted "Redwoods" in the above text
for many other great photos